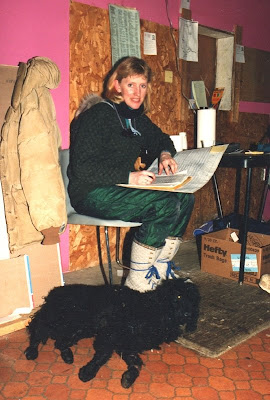 Photograph supplied by Iditarod volunteer Jim Johnson, who took it. He also shares the personal story behind the photo:

"Sorry for the poor quality on the picture but I didn't have a high-end camera at the time. Pictured is Libby Riddles at the checkpoint in McGrath with one of John Suter's Iditarod poodles at her feet. This was in 1990. The day before this pic was taken was a difficult one for this poodle. He had been taken from Suter's team because of low core body temperature (freezing). The vet was concerned that the dog would not make it through the night. I asked him what it would take to save the dog. He said if there was a way to bundle the dog in warm blankets and keep it still, its temperature might come up to the point where it's out of danger. We had no blankets at the checkpoint so I donated my sleeping bag for the task. The dog stayed in the bag all night near the radio equipment (I was there as a communicator)for warmth and the next day the vet announced that the dog was going to survive and be just fine in the long run. He stayed in the checkpoint building until he was flown to Anchorage."
Posted by June at 1:44 PM No comments:

Then came the rain....Iditarod HQ 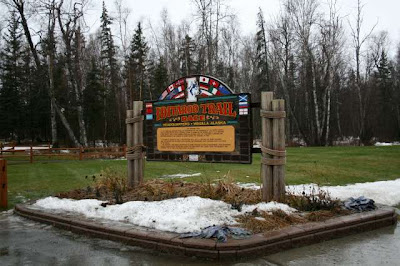 Arriving at Iditarod HQ, this isn't the winter wonderland view one would expect, huh? 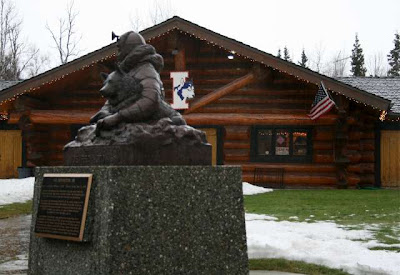 Looking at the building from my car, past the Joe Sr. memorial. 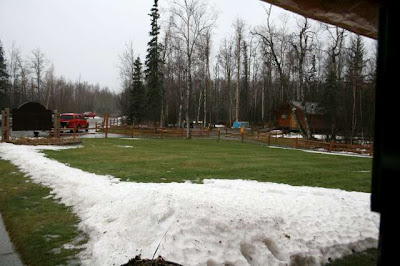 Having delivered my box of books, stopped long enough on the way out to snap some photos of the front yard at HQ, a yard that was remarkably green, not white. 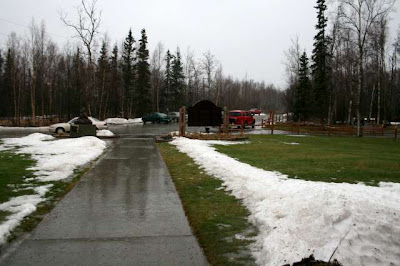 Looking straight down the walkway toward my car (behind the Joe Sr. memorial)
Posted by June at 3:59 PM No comments: 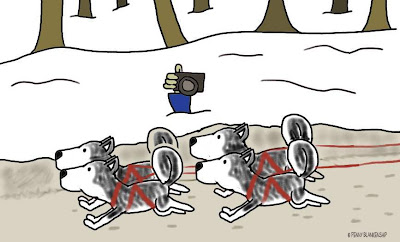 Mushing sports' photographers everywhere will identify with this shot, I'm sure. Cartoon by Penny Blankenship and should not be used without her permission.
Posted by June at 1:43 PM No comments: