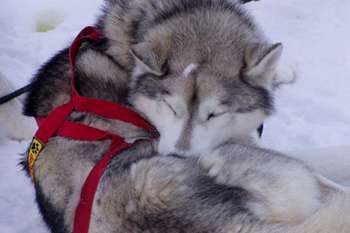 I have a friend who lives in Willow, Alaska, a mecca for mushers. She's become used to and even enjoys the constant songs of the dogs, but she noted something unusual the night of the first significant snowfall. 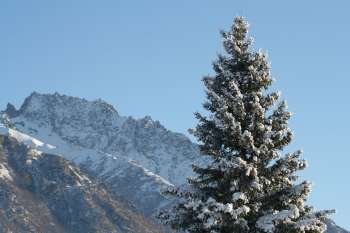 Silence. It was as if these dogs, finely tuned athletes that they are, were also somehow tuned into Mother Nature's whims and knew that soon, tantalizingly soon, it would be time to don their harnesses and run once again with sleds. They slept silently, awaiting the next morning and the glistening snow that awaited them.
Posted by June at 12:35 PM No comments: 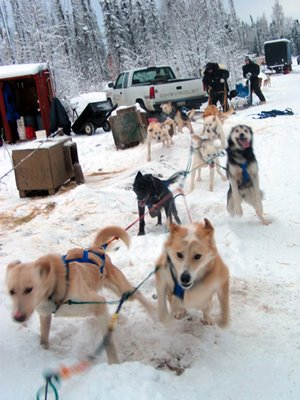 I wish sled dogs could talk. Two years ago, Hazel, shown front left in a photo taken by Brenda Borden of Hazy in her husband Bill's Iditarod team, came to live with me. I'd love to hear her stories, hear what it was like to race across the snow and ice in Alaska. Looking at her here, so focused, tug line tight, eyes straight ahead, I'll glance at her sprawled out on the floor here and try to somehow mesh the dog I see with the one in the photos.

Now, two years later, she's a not quite sedate, but more restrained retiree, living out her life here with me in Wasilla, not all that far from where she began her trips to Nome. Yes, trips. While Hazy didn't make it to Nome with Bill, coming into heat at the wrong time, she has crossed under the burled arch in Nome. She was a member of Trisha Kolegar's 2000 team. Ironically, that was my first Iditarod, tho' I have to admit, I haven't gone thru the photo stash yet to see if I have photos of Hazy on her way to Nome for the first time. Trish was running Lynda Plettner's puppy team, of which Hazel was a member.

What fun it was to talk to both Lynda 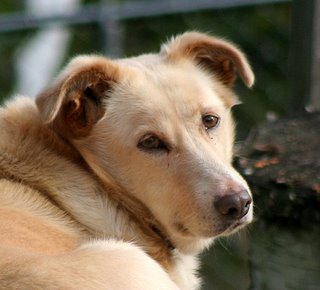 and Trish about "my" sled dog. Hey, I may never go to Nome via the runners, but it's a kick to have this living part of the Iditarod as a part of the family. At last, I can claim a tough family member, even if that family member happens to be a tough sled dog. Lynda remembers Hazy as the runt of her litter, a surprise given her solid build and incredible strength. Both recall this shy puppy being picked on by litter mates, so they moved her into another pen with some slightly younger puppies. That's when the sweetness in her eyes began to shine forth as she immediately began to mother the youngsters. From those uncertain beginnings came an Iditarod finisher. I wish she could talk.
Posted by June at 6:44 PM No comments: