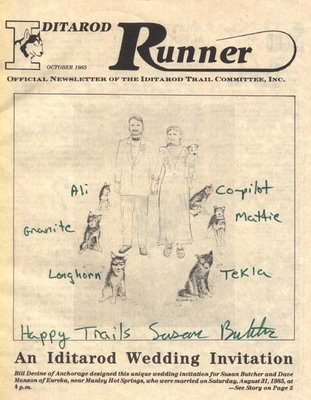 While browsing through some old photos today, I came across this one. It's a reproduction of the wedding announcment for the wedding of Susan Butcher and Dave Monson. I'd won it in an Ebay auction and took it to Alaska with me with the sole purpose of getting Susan to sign it for me.

You have to understand. I'm the world's worst autograph seeker, so this was rare for me. Sadly, I never once pondered that it might become simply a memory and that Susan would leave us only a few years later. No, I won't even go there. I want to focus on the memory of that moment, a moment that Susan shared a side of herself to which few fans had access.

Susan was at Anchorage's Millennium Alaska Hotel to give a presentation to the teachers there attending the Iditarod's annual teacher workshop. She was relaxed and funny, then at moments reflective, but open and approachable to one and all. After her presentation, after the room was cleared and I was helping organizers clean up, I sat down with Susan and Lois Harter, then the race's Education Director and simply talked. Susan and Lois go way back. In fact, it was Lois who coined the "Alaska, where men and men and women win the Iditarod" saying that adorned so many tee shirts during Susan's reign as champion.

I finally pulled out the ol' copy of the Iditarod Runner shown here. Susan burst out in laughter. "Now this is a blast from the past!" she laughed. She laughed again and began to name off the dogs shown.

"Wait!" I pleaded, digging for a Sharpie. "Write them down for me!" Oh, jeez, I was giving orders to Susan Butcher?

Susan just laughed again, giving quick tidbits about each and every one of the dogs pictured as she wrote their name for me. As she finally signed her own name, she hesitated next to the puppy in her arms. As it turned out, this one went to a then up and coming musher named Jeff King . Susan hesitated to put a name to it since she wasn't sure what Jeff had called it. Thus, the puppy in her arms remains a mystery to me, at least until I remember to ask Jeff King someday.
Posted by June at 7:32 PM No comments: 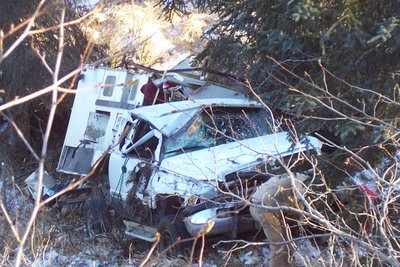 All I could think when I saw this photo, provided by rookie musher Bruce Linton, was how lucky not only Jason Mackey and he were to walk away from this wreck relatively injury free, but that the dogs also emerged in good shape.

Bruce will be a rookie in Idiarod 2007, so he already had a tough trail to travel, so this is just one more hurdle, made easier by the offer of a dog trailer by Georgia musher Bill Borden. Bill ( www.cooldreams.net ) hasn't been able to swing a run since '02, so he's just happy to see his Cool Dreams rig being useful to someone else sharing his Iditarod dreams.

Check out Bruce's website at: www.dogsledvt.com
Posted by June at 12:47 PM No comments: