Lance Watches Valley Premiere of "As Tough As They Come" 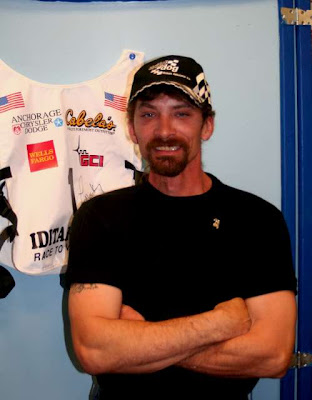 Both Martin Buser and Lance Mackey were on hand at the Valley Performing Center tonight for the premiere showing of the Iditarod's "As Tough As They Come."

"The $10 ticket price will help furnish the Animal Adoption Center, what will become the heart of the newly restored shelter, where residents will get to know a potential life-long pet in attractive surroundings."

"The animal shelter project is in the Borough's proposed 2008 budget. The budget is expected to be adopted Wed. night. A certificate of participation, similar to a revenue bond, will pay for the construction. If approved, user fees will pay for a third of the project, and the non-areawide mill levy will fund the other two thirds. Residents of an average home would pay $15.60 the first year only, and progressively less each year. Mat-Su Mayor Curt Menard is a strong supporter of the project. " 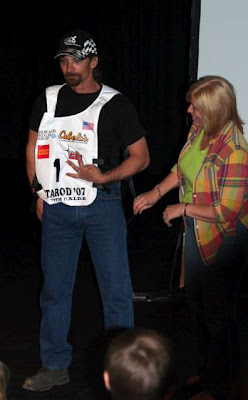 Lance models the #1 bib that was auctioned off during an intermission in the video. Cheryl Metiva, from the Wasilla Chamber of Commerce, watches as Lance adds "three" to the equation, symbolizing his own #13 bib that he wore in the race. 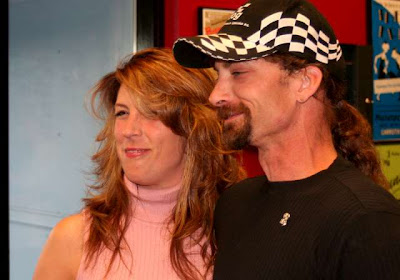 Tonya and Lance Mackey relax a few moments before the airing of the video. Lance hadn't seen it, either, so he watched it for the first time with those of us in the audience. 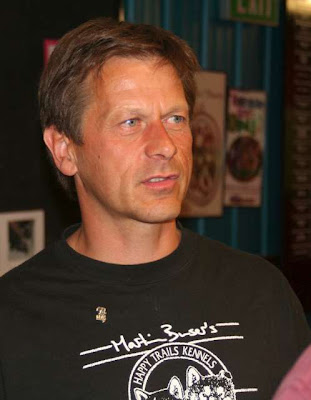 Martin Buser was also there, lending his support to the need for the shelter and joking that tho' not one of his sled dogs have wound up in the local shelter, one of their pet dogs did. Bad, Spot, bad.
Posted by June at 11:01 PM 1 comment: