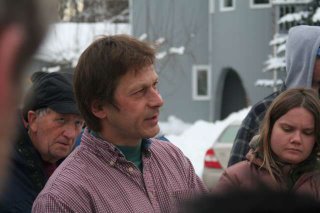 The forty rookies signed up to run Iditarod 2007 gathered at Martin Buser's Big Lake kennel this morning for the second in a series of meetings. They'd spent much of the day before in Anchorage in a meeting at the Millennium Hotel. Today, however, they were getting what was for many their first look at a genuine Iditarod musher's kennel. Even better, of course, a four-time champion Iditarod musher's kennel. Even tho' they'd heard Jeff King speak on Saturday, that was in a bare hotel meeting room, not in the context of mountain vistas, snowflakes falling, and singing dogs.

The day began early, most arriving before the sun was even up, and would continue throughout the day. His living and dining room crammed with chairs for the morning season, Martin fielded questions on everything from booties to health concerns, as well as how best to handle the inevitable impulse to scratch from the race. "Make a list of three people," Martin instructed, "that you HAVE to talk to before you scratch. Make sure I'm on it. Since I won't be returning calls, that pretty well handles that." Everyone laughed, of course, but Martin's caution that feelings of failure, fatigue and frustration could lead to scratching from the race needlessly was just one of the many bits of info he shared.

Before the day was over, he'd even share his packing list, the vital list of items he packed for the race and drop bags. While emphasizing that this list was his and would have to be tinkered with the meet individual needs, it was a start. For many rookies, today was the start of the race becoming very, very real to them, a time when the sheer magnitude of making such a list seems overwhelming, so all the advice they could soak up from Martin and the others that spoke the day before in Anchorage was much appreciated.

More photos at http://sunhusky.com/2006/December/rookiemeetingmartins/
Posted by June at 3:39 PM