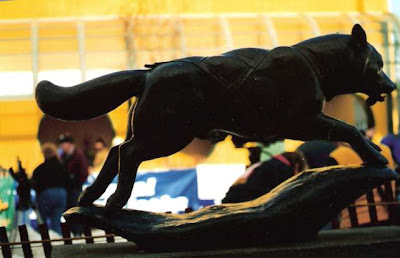 I was about as wide-eyed a rookie fan as there comes in 2000, somehow feeling like I'd fallen into some long-time fan's dream and was trying to make every minute count. To the best of my admittedly fuzzy memory, this was my first sighting of the sled dog statue along 4th Avenue. 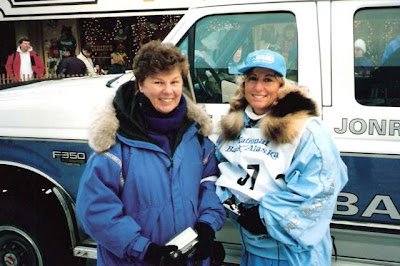 Teacher Ann Morgan and DeeDee Jonrowe. Ann and I had arrived on the same flight and it seemed as if we'd instantly become friends. 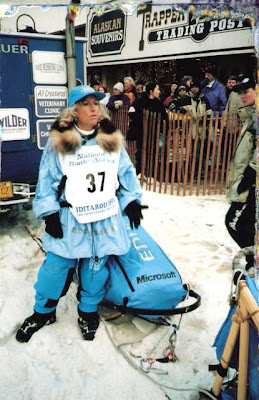 DeeDee a bit later in the morning. 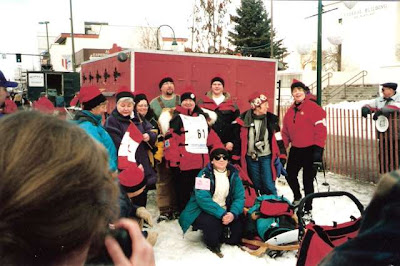 I was still wide-eyed enough of a rookie to be intimidated by Karen Ramstead (don't let it go to your head, Karen) and remember somehow thinking someone would run me off as Karen's family and friends grouped for a photo. Hey, I said I was a rookie and kept having the thought that someone would realize how much more deserving someone else was and toss me off the street and give my pass (which was courtesy of Plettner Kennels) to someone else. 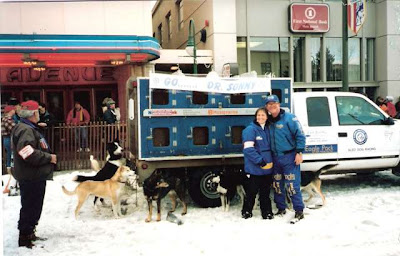 Mallie and Dr. Sonny King. Sonny no longer races but I count Mallie as one of my first Iditarod friends and still appreciate her willingness to take this starry-eyed rookie under her wing. 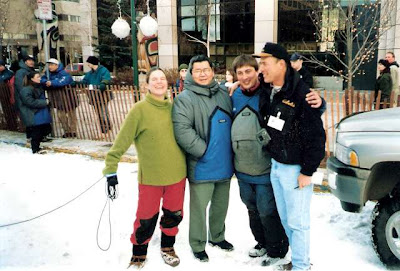 Why was I so starry eyed? Photo opts like this one probably had something to do with it. I've only recently found some of my hard copy print photos from the race and have more, but simply being able to see Susan Butcher in the flesh was enough to make the day special, so toss in the rest and, like, wow! 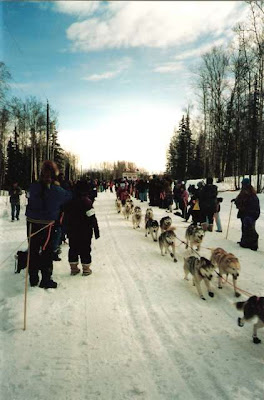 What a hoot! I was tapped to work security at the restart, which was out of Bumpus Field in Wasilla that year. I'm pretty sure I took photos of each and every team that passed, figuring this adventure in Alaska was a one shot deal and that I'd better enjoy it cos I'd never be back. Uh, okay. Ha Here's Karen's team passing my position on her way to Knik. Karen yelled "Hi, June" to me and has no idea how impressed those around me were that I "knew" a musher. Suddenly, this rookie fan from Florida was fielding bunches of questions about how to volunteer and the race in general. Ah, if they'd only known.... 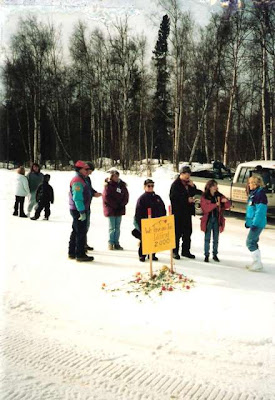 This was the first race after the passing of Joe Redington Sr. Each musher had been given a flower to drop off at the end of the Redington's driveway on their way to the Knik Checkpoint. Vi was there to greet each as they passed. This is one of those unique memories that I talked about in "Becoming Alaskan" and it really did go a long way toward showing me how Alaskans operated. Everyone pulled together and was family, perhaps the most important element of the race to most of us, being a part of the Iditarod Family.
Posted by June at 6:06 PM